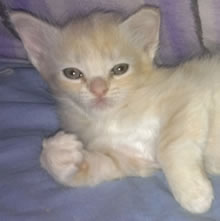 When we did the mating that produced Small, we didn't plan on keeping any of the kittens. Her Dam is Dàrna, and she was a week overdue, eventually being born by C-section. We therefore didn't want to risk another litter from Dàrna, so there was obviously going to be a temptation to keep her last kitten. When Small also turned out to be a nice example of the breed, and a delightful cat to live with, the deal was done!

Her Sire is Eiteag, who is Dàrna's grandson, making this a closer mating than we would ordinarily keep something from. However, due to the vastly different pedigrees, a mating between her and Apollo would have had an inbreeding co-efficient of only 5.4%, so we kept her with the idea of putting her to him, or another outcross boy, when she is old enough. The reason she had such a daft pet name, is because there isn't an obvious abbreviation for Fileánta, and we didn't want to come up with a more personal pet name until we had decided whether or not she was staying. By the time we had decided that she was staying, 'Small' seemed to have stuck. Elisabeth called her 'Sparkle-Sparkle' because she apparently has the 'Sparkle Factor'.

She has a short wedge with blunt muzzle and an outstanding nose break typical of Eiteag's kittens. She also has well-placed ears, and on top of that,had the two plus-points that we hadn't so far managed to get from Dàrna - her lovely long tail, and her good size.

Her first show was the Teesside, like Ayla before her, and since they were the club who originally sponsored our prefix, that always seems very appropriate place to debut a new Cagaran baby. Both there, and at subsequent shows, she proved to be an utterly adorable little show-cat, whom all the judges adore. She made up to Champion in three straight shows and at the age of just under 10 1/2 months, winning her three certificates from Sarndra Devereux, John Harrison and Louvane Stevenson.

Small must carry chocolate, from Dàrna, but since we don't know whether Eiteag masks blue or lilac, she could be either colour underneath. She must also carry Burmese Restriction, from Eiteag, and since Dàrna definitely carries self, and Eiteag might do, there is a possibility that she could carry that as well.

She had her only litter to Helen Marriott-Power's Quin (I GR CH Mainman Quintessence), a Burmese boy who's pedigree hadn't appeared in Asians before, making him an excellent outcross. She had five cream Burmillas: two boys and three girls, and we kept one of the girls, Lura. When people were coming to meet her kittens, one of the ladies fell in love with Small herself, instead of the kittens, and the feeling seemed to be mutual, so we had Small spayed and let her go to live with them instead of keeping her ourselves.