A black tabby, a cinnamon ticked
tabby and cinnamon classic
tabby cuddled up together

Cinnamon and its dilute, fawn, are allowed Championship colours in the Asian Group. However, these colours do not occur in UK Burmese and Chinchillas, and therefore have to be brought in from outside the breed's original parameters. As a result, they are extremely rare, and at present there are only a couple of full registration cinnamons (no fawns that I am aware of), and no more than half-a-dozen cats that carry the gene. Even more problematic, most, if not all, of these cats are quite closely related, and in an effort to retain the cinnamon gene, the cinnamons are often rather in-bred. 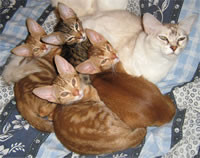 Three cinnamon tabbies with a
black tabby and a silver shaded

Being a lover of ginger moggies, I (Heather) love the rich, gingery colour that cinnamon gives, and would love to work with it in my Asians, and particularly my Tiffanies. My favourite colour of Abyssinian has always been the sorrel (like Gealbhan), which is what they call cinnamon in Abyssinians and Somalis, with fawn (like Monty) a close second. My dream would be to have a cinnamon or fawn self Tiffanie, but at present that is an absolute fantasy, with no possibility of reality. Richard likes the fawns, but isn't so wild on the cinnamons, because he prefers the paler colours. 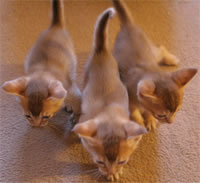 The GCCF registration policy for the Asian Group permits outcrossing to certain other breeds, judged by the BAC (Breed Advisory Committee) not to be too different in type. The initial outcross mating is followed by four generations registered as 'Cat of Asian type', before the resulting offspring count as full register Asians and can be shown. I am so keen to bring in a new line of cinnamons, however, that I consider it worth the wait. In 2013, we therefore started an outcross programme to bring in a new cinnamon line.

Gealbhan demonstrating the rich
cinnamon of the Abyssinian 'sorrel'

We began by doing two outcrosses, so that we can bring down two lines to mate together at the final stage, in the hope of producing a cinnamon or fawn Tiffanie. Originally we planned to use our usual Somali, Sonia (she is a sorrel/cinnamon carrier) for one of the outcrosses, but our cinnamon Ocicat Classic girl, Cheeky, actually turned out to have better Asian type, so we used her instead. The other outcross was Ayla to a gold (fawn in Australian mist speak) Australian Mist..

The matings will take us up to probably 2018, so we cannot be sure exactly which cats will be involved later on, but if we were to choose from the cats that we have at present, we would be looking at something resembling the following:

When outcrossing to a different breed, the challenge is to retain the look of the parent breed. We have chosen outcross cats who are not too distant in head structure and body type to our Asians, though there clearly are differences. The biggest issues that we anticipate having with resultant type are the lack of a strong nose-break, because both outcross breeds just have a gentle curve rather than the break of the Asians and Burmese, and the loss of the Burmese/Asian scowling expression.

We therefore chose our two cats with the strongest nose-breaks for our first-generation cross, that is Ayla and Eiteag, the latter having originally been kept purely for this purpose. We hope that by using cats with very strong type, particularly in terms of eye shape, in the subsequent generations, such as Apollo and Tia, then Lhasa, Donny and Keeker, and finally some Burmese, Asian or Tiffanie studs, that we can retain the desired Burmese/Asian look.