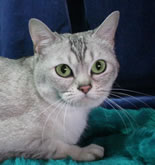 Tia was the first Burmilla girl that we owned, and came to us from Mark and Avril Perkins (Ashputtel Asians and Burmese) in Poole. Her breeder was Margaret Dewhurst (Skampaws Burmillas) in Dorset. Mark and Avril took the difficult decision to give up breeding due to age, and had spayed and neutered all of their cats, except for Tia, whom they offered to us after checking with Margaret. We are very grateful to both Margaret and Mark and Avril for letting us have this beautiful girl. With her lovely type, cracking nature and unusual pedigree, she has been a real asset to our breeding.

Tia's sire is a lovely chocolate Burmese boy, CH Isajen Skampaws Magic, who has a very unusual pedigree, and her dam is a Classic Tabby Asian, Kenzie Shanti Stardust. Tia has fabulous type, with beautiful, big, green eyes of excellent shape, a lovely blunt muzzle and well-placed ears. Her coat is lightly marked with a sparkling silver undercoat, and has a lovely silky feel. The most remarkable thing about her, though, is her absolutely outstanding temperament. She came to us as a two-year-old, yet was never anything other than utterly gracious about the move, rolled around on her back to get her belly rubbed whenever we sat down with her, and has the most fabulous purr.

Mark and Avril haven't shown much in recent years, so Tia hadn't been to a show before we took her to the West of Scotland at the end of 2012, when she was two and a half. I wasn't sure what she would make of it, but she proved once again just what an absolute star she is, by not only taking it in her stride, but seeming to positively love the experience. She was rolling around on her blankets, padding away with her paws, and when being judged stood beautifully on the table to allow herself to be checked over. She was awarded the CC and also Best of Breed, and went on to win two firsts and a second in her side classes, beating some lovely cats in the process. A few weeks later, we took her to the joint Shorthair and AGCS (Asian Group Cat Society) shows, where she picked up the CC in both shows, making her a Champion. Since we still hadn't put her in kitten by the end of that summer, we took her to the Teesside (where she went Best Foreign), and the Chester, and she picked up a Grand certificate at each of these shows and then the final one after having a litter of kittens.

We knew that Tia would carry non-silver and non-agouti, because of her Sire being a Burmese, and also Classic from her Dam. There is dilute on both sides of her pedigree and she had two dilute kittens in her first litter with us, so she definitely carries that as well. Although her Dam's sire is a longhair carrier, our luck ran out there and she doesn't carry longhair.

One of the kittens in Tia's first litter, Jock, went to live with a lovely family in Paisley, who had come to visit us the previous year and fallen in love with Tia, chosing her as the future mother of their kittens. Unfortunately he picked up an infection about six months later, and had to be put to sleep. I promised his owners one of the kittens from Tia's next litter but then they had another stroke of horrendous bad luck when their other cat managed to escape and was run over on the road by their house. They have always had two cats so they asked if they could have two of Tia's kittens but since there were only three in the litter and we're keeping two of them for the cinnamon outcross programme, that wasn't an option. I realised that although we'd planned to have another litter from Tia the next year, we would be doing that only because we love her kittens and not because the breed needs it (we already have a daughter from her and there is one of her sons and another two daughters with other breeders), so I asked Mark and Avril for permission to offer Tia to the Logans. They agreed that we'd have had to be thinking about her future anyway, since she was five at that point, so it seemed the best thing for her. The Logans jumped at the opportunity to have their favourite of our cats along with her kitten and so we've hopefully got the best outcome for everyone.

Three of her kittens have been shown:
CH Cagaran Julie-Jo (Julie) - owned by us
'Burmilla', Chocolate Tortie Silver Tipped BCR