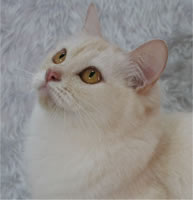 Fiona was the first girl that we kept of our own breeding. She was from Dàrna's first litter, to CH Nemorez Agentorange, who is an Apricot Silver Shaded Tiffanie boy, owned by Steve Crow and Tommy Goss (Kagura Asians and Burmese), in Essex. She is a beautiful girl, with a lovely head, gorgeous amber eyes, slender limbs, neat oval paws, silky fur and a sparkling silver undercoat. We were so lucky to have a girl like her in one of our first litters!

Fiona has inherited her mum's fantastic nature, though she doesn't behave nearly as well at shows. In the house, however, she is utterly adorable, giving big cuddles and purrs to anyone who wants them. Dàrna's second litter were born slightly earlier than we expected, and I hadn't yet removed Fiona from the kitten room, where she had been keeping her mum company. Instead of this being a problem, Fi just climbed into the nest with her mum, and helped with all of the kitten duties, especially toileting, which Dàrna is rubbish at. In fact, Fi was a much better mum to Dàrna's kittens than Dàrna herself was!

Fiona's first outing to a show was to the Asian Group Cat Society breed show, at just under 16 weeks, and she excelled herself, not only winning her 1st and Best of Breed, but going on to take overall Best Kitten. A few weeks later, she repeated this performance at the Preston and Blackpool All-Breed show, winning Best of Variety Kitten, then overall Best of Variety, and eventually being shortlisted into the last three for overall Best in Show! For a kitten of just six months, that was a huge achievement, particularly given the quality of some of the other cats in her section at that show. Unfortunately, her hormones kicked in after that, and she started misbehaving at shows. She made up to Champion at just over 11 months, and we have retired her from showing for the time-being. We will try taking her out on exhibition (not judged) a couple of times and will see how she does at that, before deciding whether to enter her in competition again.

Fi was born to a mating that could have produced any colour combination available to the Asians, except cinnamon and fawn, and virtually any pattern, so there are a lot of possibilities for what she herself may be able to produce. She has produced a non-silver kitten, and a couple of burmese restriction kittens, so must carry those, and also some spotted tabbies, so must mask tabby, which we already suspected due to the strong classic/spotted ghost-markings that she showed as a kitten. She must also carry chocolate, because her mum shows that, but beyond that her parents don't really tell us much. Her dad masks blue, and carries chocolate, so she could be either black/chocolate or chocolate/chocolate, depending on what she received from him.

Fi had her first litter in May of 2012, to CH Kagura Shogun, to whom Katie had produced beautiful kittens the previous year. He was to be neutered as soon as Fi was confirmed as pregnant, so we knew that the resulting blood-line was going to be quite valuable in breeding terms (that doesn't make any difference to the cost of kittens, in case you are wondering). Shogun is a shorthair (Asian Tabby), but carries the longhair gene, and as with Katie's litter to him, we were lucky enough to have Fi produce a whole litter of Tiffanies (two boys and two girls), with whom Fi proved to be a brilliant mother. We have kept two of these at the moment - a daughter, Ayla, and a son, Etak, though the latter is only intended to have one litter, as part of our cinnamon-outcross programme. From these two, we also have two of her grandchildren, Zuko and Hailey.

All four of her kittens have been shown:
CH Cagaran Eala-Bianach (Ayla) - owned by us
Tiffanie, Chocolate Tortie Silver Shaded BCR - once Best Kitten