We began our Cinnamon Programme in 2013, with the initial outcrosses used to bring in the cinnamon gene. We are expecting to complete the process in 2018, following five generations of matings. For the first four generations, the descendants of the outcross are classed as 'Cat of Asian Type', rather than full Asians. If we are not to become over-run with cats, we will need to be strict about re-homing cats after they have made their contribution to the programme, and this is probably going to be the biggest challenge of the whole process, particularly considering that we are already absolutely in love with the early participants - oh dear!

You can click on their names to jump to their individual introductions, further down this page. 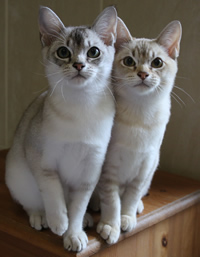 Sùlair is Gaelic for 'Gannet', and Smudges had one of the biggest appetites any of our kittens has ever had (to be fair, he was one of our biggest kittens!), though he's thankfully not so ravenous now he's older; Solas is Gaelic for 'Light', and got the name because she was the pale-coloured kitten in her litter and also has a very sunny temperament.
F3 'Cats of Asian Type'; Smudges is a Brown Silver Shaded (equivalent to GEMS code ASH ns 11 31 / breed number 72 43sq) and Solas is a Chocolate Shaded Burmese Pattern (equivalent to GEMS code ASH b 11 31 / breed number 72 43bq)
D.O.B. 21/06/16
Burmese Hypokalaemia Normal by Parental DNA tests
Smudges' and Solas' Pedigree (opens a new window) 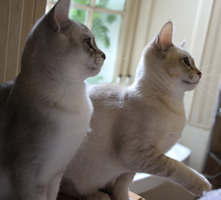 Smudges and Solas are both from the first of our third-generation cinnamon outcross matings, between one of our F2 outcross boys, Goldie, and one of our Tiffanie girls, Lhasa. Since keeping two kittens (rather than our original plan of keeping a parent and one kitten) worked so well last time round, we decided to do the same this time. There were five kittens in the litter and we decided early-on that we wouldn't keep the smallest one, so we DNA-tested the other four (we actually knew that one of these had to be a cinnamon-carrier because her colour meant that her dad had to have passed her his cinnamon gene, but we tested her just to be safe). One of these didn't carry cinnamon (one I'd have loved to keep because he was a spotted tabby!), which left us a choice of three: a brown silver shaded boy (Smudges), a chocolate shaded girl (Solas) and a brown spotted tabby girl (Melody). I really wanted to keep a tabby but Melody was a bit shyer than her siblings, who are both incredibly purry, cuddly and outgoing, so we kept Smudges and Solas as our first F3s.

Smudges is the better of the two at the moment but both he and Solas have good nose breaks, nicely rounded heads, much better chins than our F2s had, nice coats and are lovely big, strong, cats. They both tend to hold their ears a bit high, though Solas is worse for this than Smudges, but they are so adorable that nobody cares!

Both cats will carry non-agouti (self), classic tabby and longhair, from Lhasa; Smudges will also carry non-silver from Goldie. They may carry dilute and may mask spots. 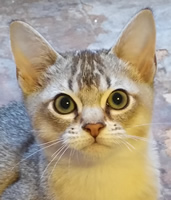 Òrail is Gaelic for 'Golden', and Goldie is named for his subtle golden colouring; Ogha is Gaelic for 'Grandchild', a name we wanted to give to one of the kittens from this litter, since they're the grandchildren of the outcross.
F2 'Cats of Asian Type'; Goldie is a Chocolate Ticked Tabby (equivalent to GEMS code ASH b 25 / breed number 72 45b) and Spots is a Chocolate Silver Spotted Tabby (equivalent to GEMS code ASH bs 24 / breed number 72 38bs)
D.O.B. 17/07/15
Burmese Hypokalaemia Normal by Parental DNA tests
Goldie and Spots' Pedigree (opens a new window)

Goldie and Spots are both from the first of our second-generation cinnamon outcross matings, between our F1 outcross boy, Zuko, and one of our Burmilla girls, Tia. Our original intention was to keep one of the kittens from this mating but also keep Zuko entire, until his kitten had proved fertile, so that we didn't risk losing the outcross line. Unfortunately, however, once Zuko had mated Tia, he then wouldn't live with our other boys anymore, but was miserable by himself. We therefore decided to keep two of his sons, so that one could act as a 'backup' to the other, enabling us to neuter Zuko and let him go to live with Tracey (Quinn and Xaria's owner), which had always been the long-term plan for him, as she's loved him since he was tiny. 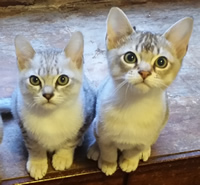 There were three kittens in the litter, all of which were male and were huge, strong kittens (some of the largest we've ever had) with fabulous cuddly, purry temperaments. In terms of type, Goldie (above, right) was always the best of the three, followed by Spots and with Malcolm bringing up the rear. When we DNA-tested the boys, I was delighted to discover that Goldie and Spots both carried cinnamon, whereas Malcolm did not; I had honestly expected the 'gene fairy' to have made Malcolm the only cinnamon-carrier, meaning that we'd have to keep the least typey of the three, so this was a great result. Neither Goldie nor Spots carries the longhair gene, unfortunately, but we can't have everything!

Goldie has a lovely rounded head, decent nose break, good ear set and lovely Asian eyes. His chin could be stronger but that's about the only thing he can be faulted on, which is excellent for an F2. Spots also has good rounding to his head, a decent nose break and good Asian eyes but he tends to hold his ears too high (as can be seen in the picture to the left) and also needs a stronger chin. As a work in progress, though, we are absolutely delighted with both boys. Assuming that everything goes well with Goldie, we will mate him for the next generation of the outcross, but at least we've got Spots there if he's needed.

Both boys will carry dilute and Burmese restriction, from their dad, and Goldie will carry spots. Both may carry classic.

In Gaelic, 'H' is always used after another letter, because it is used for 'lenition', e.g. mh, bh etc. We therefore decided to use old Scots to name our 'H' litter. Haillie-a-Jo is old Scots for 'Totally a Sweetheart' - so-named due to her adorable temperament.
F1 'Cat of Asian Type', Chocolate Tortie Classic Tabby (equivalent to GEMS code ASH h 22 / breed number 72 41h)
D.O.B. 09/10/13
Burmese Hypokalaemia Normal by DNA test
Hailey's Pedigree (opens a new window)

Hailey is from our second cinnamon outcross, between our Tiffanie boy, Eiteag, and our Ocicat Classic girl, Cheeky. Neither parent started life with the intention that they should be used for breeding, but we are so glad we mated them together, because Hailey is both stunning to look at, and utterly adorable. We had always planned to keep Eiteag's sister, Ayla, but when Eiteag was a few months old, I was looking at him one day, and suddenly realised what a fabulous nose break he had, which would make him perfect to counteract the straighter Somali profile in our first generation cinnamon outcross. We therefore decided to keep him for that purpose. Cheeky, on the other hand, was always going to stay with us, but the intention was that she should have been exclusively a neutered pet. However, just before I was going to have her neutered, I realised how much closer to Asian type 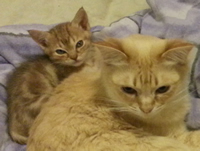 she was than our Somali girl, Sonia, who we had bought for one of our cinnamon outcross matings. I therefore decided to keep Cheeky entire just a little longer, to have one of the outcross litters from her before she was spayed.

Hailey has the most gorgeous rounded head, strong chin, a good nose break, a short, blunt muzzle and beautiful Burmese/Asian eye shape. She is possibly the cutest kitten I've ever seen, and makes everyone who sees her go 'Awww'. Several people have called her 'impossibly cute', and that's certainly the term I use. She must carry the cinnamon gene, from Cheeky, and the longhair, dilute and Burmese Restriction genes from Eiteag.

Since Zuko and Hailey are both chocolate tabby shorthairs carrying cinnamon, dilute and longhair, their litter could contain both longhair and shorthair kittens in chocolate, lilac, cinnamon or fawn, with or without Burmese Restriction, in spotted or possibly classic tabby. In an ideal world, we would love two cinnamon or fawn longhairs, but as a minimum we want two kittens who carry both the cinnamon and longhair genes like Zuko and Hailey do.

Although most girls will want mated by the time they are between a year and fifteen months old, Hailey consistently refused to allow any boy to mate her until she was over three years old, and it wasn't for lack of trying: she had Apollo to begin with, then Donny, then Keeker, then Spots and finally Brodie. We had decided that Brodie was her last shot and that if she wasn't pregnant by January 2017, we would have her spayed and go back to the drawing board for a second outcross. Either she heard us or had been saving herself for Brodie, though, because she allowed him to have several good matings on the 19th of December 2016, and she gave us four gorgeous kittens on the 22nd of February 2017. 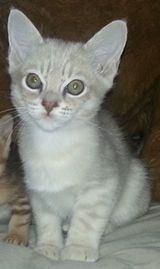 Zuko was from our first cinnamon outcross, between one of our Tiffanie girls, Ayla, and a 'gold' Australian Mist called Hobson, owned by Tricia Bristow (Gossamyst Australian Mists). There were only two kittens in the litter, and Tracey (Quinn and Xaria's owner) named the girl 'Frenchie' early-on, due to her habit of giving sloppy kisses. Since Frenchie is the name of a character in the musical, Grease, the boy somehow ended up being called 'Zuko'. 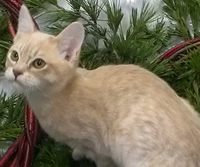 Originally we were planning to mate the two first-generation kittens together (obviously when they were older), so we held off making a decision about which of Ayla's kittens to keep untill we could see what the second litter produced. The second litter only contained one kitten, Hailey, who is a girl, so it was Zuko we had to keep. Conveniently, given the choice, he would have been the one we would have chosen to keep anyway, because he was the better of the two kittens in terms of Asian type. Frenchie was a little long in the head, too narrow in the muzzle and her eye contour was too gentle. Zuko, on the other hand, has a lovely short wedge with a broad, blunt muzzle, a good nose break and lovely Burmese-style eyes. Frenchie had the better coat texture, but since the rest of our Asians all have lovely texture, we're not worried about having to get the correct texture back.

Gold is the name given to the fawn colour in the Australian Mist breed, fawn being the dilute of cinnamon. Zuko therefore must carry both cinnamon and dilute from Hobson, and will carry the longhair gene from Ayla. Hobson is a spotted tabby, but carries classic, so there is a 50/50 chance that Zuko also carries the classic gene.

Once Zuko was old enough we decided to mate him to one of our Burmilla girls, Tia, instead of to Hailey, in order to keep the two cinnamon lines separate until the end (keeping inbreeding levels lower). Zuko had always lived with our other boys (initially Donny and Eiteag and then Keeker, when Eiteag went to Ireland), but after mating Tia, he wouldn't tolerate the others, so we had to keep him alone. He was totally miserable by himself, though, so we had him neutered and he's now gone to live with Tracey, who has loved him since he was a tiny baby and had always been promised him once he was neutered.