Plathach is Gaelic for 'Smoking', pronounced Platach (where the 'ch' is pronounced as in 'loch') 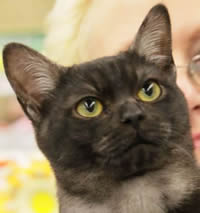 Brodie is only with us temporarily, before going to live with Sarndra Devereux, who owns his stunning sire. He was from Lhasa's second litter with us, out of Sarndra's Bombay boy, I GR CH Rainsong Jolly-Jack-Tar (Tarby). Brodie is litter-brother to Silkie, and was one of two black smokes in the litter, the other having gone to live at the Cat in the Window Cat Café in Aberdeen, where he has quickly become a favourite due to his cuddly temperament. Like his brother, Brodie is extremely cuddly and has won a lot of fans when he's been out to shows.

He's a lovely boy, with a good broad head (that's where his pet name came from - the other boy was narrower, so Brodie was known as 'Broad' until Sarndra suggested Brodie as a name), lovely strong muzzle, fabulous Burmese scowl and excellent nose break. His chin could be stronger and his smoke 'bleeds' through the top coat a bit much for perfection but so far he's been forgiven those faults due to the rest of his type and his lovely temperament; cuddling, kissing and purring at judgesgoes a long way! So far, Brodie hasn't started spraying so is still able to live in the house, though we've now separated him from the girls 'just in case', and put him in with the boys, where he and Donny have become fast friends. Maybe it's a smoke thing.

Brodie's first show was the Preston and Blackpool, which was in January this year (it's usually March), and both he and Silkie wowed the public with their fearless clambering between potential 'cuddlers'. He made Champion in straight shows, winning CCs at the Chester, Teesside and Cumberland shows. The highlight of his showing so far, though, was winning Overall Best in Show at the Scottish Shorthair in April, at just a day over six months old!

Since Lhasa is a brown, Brodie must carry Burmese Restriction, and he'll also carry longhair from her, so we'll be hoping he gives us some Tiffs. His dad definitely carries dilute and both parents carry chocolate, so it's possible he could carry one or both of those as well. Since Tarby is a black self, Brodie must also carry non-silver,