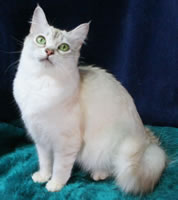 Ayla is from the first litter that we had out of a cat of our own breeding, making her and her siblings the first 'second-generation' Cagarans. Her Dam is Fiona, our beautiful Apricot Silver Shaded Tiffanie girl, and her Sire is the gorgeous Shogun (CH Kagura Shogun), owned by Sarah Davidson (Karakoram Burmese and Asians), in Fife, and bred by Steve Crow and Tommy Goss (Kagura Burmese and Asians), in Essex. She is litter-sister to Eiteag.

She is a cracking little girl, with a stunning short, straight nose with excellent break, broad, blunt muzzle, firm chin, lovely eyes, slender limbs, beautiful oval paws, silky fur and a sparkling silver undercoat. Her only 'faults' are that her tail should be longer, we would prefer her slightly bigger, and she has a habit of holding her ears too high, though their set is excellent when she is relaxed. She has inherited the fabulous nature shared by both her mum, Fi, and grandma, Dàrna, and unlike her mum, she behaves impeccably at shows. Ayla is our little poppet, and absolutely loves cuddles, giving us huge purrs whenever she is picked up.

Ayla's first show was the Teesside, which seemed fitting, since that was the first show we did with Annas, our first Tiff, and also the club who supported our Prefix application. She was Best of Breed there, as well as at the Scotia, Yorkshire and Supreme, where she also won the Special Kitten class, which is judged on temperament and condition, and which her granny Dàrna won the first year the class was offered. Her next time out was to the Asian Group Cat Society breed show, where she followed her Mum's and Uncle's lead in becoming Best Kitten - the third year in a row that one of our kittens had won that award. After that, she didn't come out again until she was an adult, when she won her three CCs in straight shows, making up to Champion at the age of 10 1/2 months.

Ayla must carry non-silver, since Shogun is not silver, and must also carry dilute, because Fi is an Apricot (a dilute colour). In addition, because Shogun is a spotted tabby, and Fi showed strong tabby ghostmarkings as a kitten, Ayla must mask spotted tabby, and possibly classic tabby as well. Shogun definitely carries non-agouti, as do both Fi's parents, so there is also a decent possibility that Ayla will be able to produce selfs and smokes.

Our first litter from Ayla was one of the first-generation outcrosses for our cinnamon programme. She went all the way to Exeter, to visit an Australian Mist boy, and produced two gorgeous spotted tabby kittens, a boy and a girl. Our friend Tracey named the girl 'Frenchie' due to her habit of giving big sloppy kisses, and since Frenchie is a character in the musical, Grease, we decided to name the boy 'Zuko'. He had the better Asian type of the two, and therefore stayed with us to form one half of the second generation in the cinnamon programme. The first four generations descended from the outcross are classed as 'cat of Asian type', rather than full Asians, and can only be shown in the Pedigree Pet section. They excelled themselves there, however, with Frenchie picking up the 'Best Household Pet' award on her first time out.

Her second litter was by Donny and contained four gorgeous kittens: a brown silver ticked tabby shorthair and an apricot silver shaded shorthair who went to live together near Berwick and then two Tiffanie girls, both of whom were brown tortie silver shaded, but very different in pattern. One was a 'splodgey' or 'harlequin' tortie (like Donny's litter-sister, Quinn) and the other was known as 'Secret Tortie' because her tortie was almost invisible initially, though it has become more apparent as she's got older. Both live with an older kitten of our breeding: the former with her older half-brother from Tilly and Donny's litter last year ('Horatio', who lives with our vet) and the latter with Duchess, Julie's litter-sister.